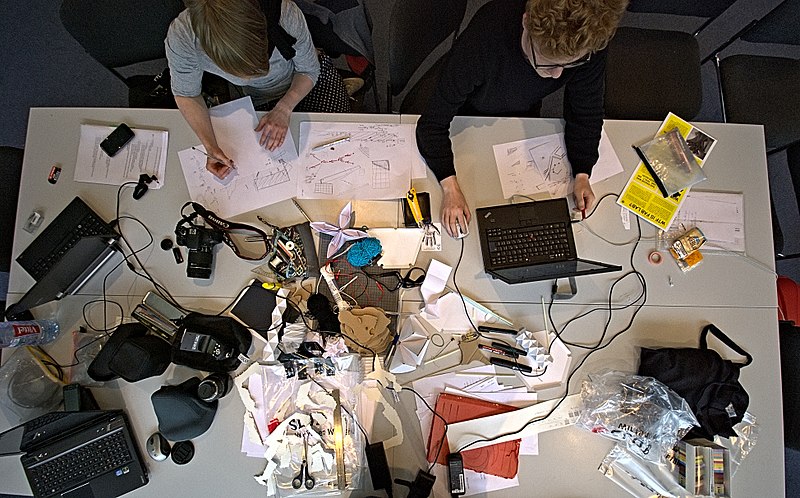 Posted at 17:20h in Uncategorized by Mariana

This article by Òscar Martínez Ciuró was previously published in the book Deconstructing the Maker Manifest, p. 100-105.

Over the last decade, digital manufacturing has been seen as a fantastic and very promising set of technologies to reduce product development times and costs, as well as to address the need for customisation of objects and to address specific needs in today’s education system.

The democratisation of access to rapid prototyping has led to the adoption of open learning formats in both formal and informal education, cultural activity programmes and social innovation enterprises. From an educational perspective, the values of maker culture, such as project-based learning, open processes, creative experiences and a focus on group work, have become the main mantras of what is known as the maker movement.

Traditionally the maker world has been characterised by adopting creative methodologies around do-it-yourself philosophies in a highly individualised environment. With the expansion of the internet and communication capabilities we have reached new methodologies, it is when we realise that people who are better connected personally and professionally have better ideas than those who are not. Do-it-together, a method that brings values such as peer learning, localised production, and reuse of materials, has started to become popular. From this point we can also infer other visions such as the techno-geek world and hacker culture.

Makerspaces, and maker spaces inside the school, are places where anyone should be able to make anything, at any time, with (almost) any material. The main goal is for students and participants to share their knowledge and skills with the whole class or community to combine the engineering approach with a high spirit of creativity, as well as to revive the more traditional, artisanal ways of working.

Science, art and DIY culture come together for individual and collective empowerment as well as collective change. Makerspaces have already enabled the creation of innovative projects and entrepreneurial initiatives around the world, as an incubator for the emerging circular economy. Through this emerging relationship framework, the democratisation of design, engineering, manufacturing and also children’s education is promoted and sustained. Playful experiments such as building robots, apps, gadgets and smart objects are an open door to dreams, where we can all bring our imagination into play.

Collaboration and adaptability are essential skills in this ecosystem, they foster learning and sharing, social return, and economies of exchange. And they are as important as the concepts of prototyping or beta development, inherited from other disciplines. Thus, a typology of person is formed that brings together skills, competences, imagination, research, idealism.

One of the skills that works very well within this environment and which we cannot forget, as it is a basic component, is play. As Dougherty rightly points out, play is part of research and invention[1].

Early scientists, the so-called “natural philosophers”, played “parlour games” by showing what electricity did with devices they created themselves. They were, as Steven Johnson[2] says, “These gadgets were the ‘Special Effects’ of Enlightenment popular culture”. Scientific research and investigation were in the hands of people who played with intuition and the serendipity of discovery.

Despite the years and the generalisation of the scientific method, this spirit remains in the realm of those who make, create and do. There is a widely recognised vision in which the maker locks himself in his garage and comes out with an “invention” that improves something he had at hand, improves a process by modifying one of its steps or adapts something in an individualised way. We humans, in childhood, learn in an environment of social collaboration, playing and building through experimentation, role-playing and trial and error. In the history of modern pedagogy, renowned pedagogues such as Montessori and later Piaget put forward the maxim “Play is the work of the child” as a paradigm for new pedagogical trends. This first inclusion of play in the educational environment made it easier for later theorists to reflect and contribute their vision. Rogers gives a further twist to the educational sense: “Play gives children the opportunity to practise what they are learning”. But play is not a chore, nor is it the opposite of work. Stuart Brown in the book “Play: How it shapes the brain”[3] says that the opposite of play is depression. Maslow[4], on the other hand, outlines it with: “Almost all creativity involves play with a purpose”, although this phrase comes from an educational environment we can extrapolate it to other ages and environments, and it fits very well with the maker world.

But, Brown and Vaughan[5] are already following the thread of the maker movement, which began in 2005, incorporating concepts into the educational environment, commenting that play is recreation because we make anew, recreating ourselves and the world around us.

Play creates a zone of proximal development, if we follow Vigotsky’s[6] indications, both in children and adults. This indicates that the environment in which we work, in the case of makers, the garage, the FabLab or the makerspace, becomes a space that feeds back creativity and invention.

Both design and play involve breaking away from habitual ways of thinking. This requires, on the one hand, the ability to imagine how things might be beyond a simple description or representation of how things are (inventing alternative forms); and a desire to give form or expression to the things imagined, projecting outwards (thus making hidden ideas tangible and shareable). These requirements speak to construction and iteration. Playing with materials and awakening the imagination is just a start and, from there, ideas emerge. The materials can be many (finger paint, crayons, bells) and the creations in various formats (images, stories, songs), but the basic process is the same. We could draw this process as a spiral in which people imagine what they want to do, create a project based on their ideas, play with their creations, share their ideas and creations with others, reflect on their experiences… and all this leads them to imagine new ideas and new projects.

Playing helps us develop and refine our skills as creative thinkers. We learn to develop our own ideas, to test, to test the limits, to experiment with alternatives and, perhaps most importantly, to generate new ideas based on lived experiences. In reality, the steps in this process are often not distinct or sequential. Imagining, creating, playing, sharing and reflecting blend together in many different ways.

In Hatch’s[7] Maker Manifesto playing is represented as a solitary and naïve process, makers use tools that are complex, such as jigsaws, soldering irons, silicone guns, electricity?, they require prior knowledge and refined skills, they are not toys, the play is in how we use these tools to create.

The best way to end this text is by quoting Einstein, to whom is attributed the phrase: “Games are the highest form of research”.

[1] Yet the origin of the Maker Movement is found in something quite personal: what I might call “experimental play.” When I started Make magazine, I recognized that makers were enthusiasts who played with technology to learn about it. A new technology presented an invitation to play, and makers regard this kind of play as highly satisfying. Makers give it a try; they take things apart; and they try to do things that even the manufacturer did not think of doing. (Dougherty, 2013).

[2] Johnson, S. (2008). The invention of air: a story of science, faith, revolution, and the birth of America. New York, Riverhead Books.